by Enrico Baccarini© – Vimanas are described in ancient Indian literature as the ‘chariots of the gods’, a sort of technological vehicles similar to modern one but also able to have much more incredible powers in confront to our airplanes. Behind all these ‘literary’ description there is something more, exist a real technological background lost in the time but also passed throughout ages as an oral tradition. We have founded some quotations from classical Sanskrit literature, verses we had chosen specifically to illustrate the visual appearance, nature and capabilities generally ascribed to these ancient fabulous vehicles known. 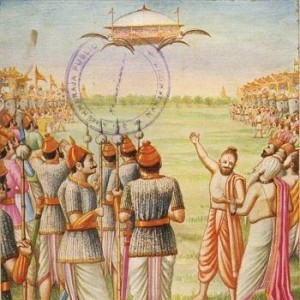 “Having spoken thus, Maharaja Nirga made a complete circle around Lord Krishna and touched his crown to the Lord’s feet. Granted permission to depart, King Nirga then boarded a wonderful celestial car as all the people looked on.” (Bhagavata Purana)

“While Dhruva Maharaja was passing through space, he saw, in succession, all the planets of the solar system, and on the path he saw all the demigods in their vimanas showering flowers upon him like rain.” (Bhagavata Purana)

“He traveled in that way through the various planets, as the air passes freely in every direction. Coursing through the air in that grand and splendid vimana, which could fly at will, he surpassed even the Devas.” (Bhagavata Purana)

“Then the highly intelligent Asura Maya built the cities . . . There were many palaces with gems. Aerial cars shining like the sun, set with Padmaraga stones, moving in all directions and looking like moonbeams, illuminated the cities.” (Siva Purana)

“When morning dawned, Rama, taking the Celestial Car Puspaka had sent to him by Vivpishand, stood ready to depart. Self-propelled was that car. It was large and finely painted. It had two stories and many chambers with windows, and was draped with flags and banners. It gave forth a melodious sound as it coursed along its airy way.” (Ramayana)

“The Puspaka Car, that resembles the sun and belongs to my brother, was brought by the powerful Ravan; that aerial and excellent car, going everywhere at will, is ready for thee. That car, resembling a bright cloud in the sky, is in the city of Lanka.” (Ramayana)

“Beholding the car coming by force of will Rama attained to an excess of astonishment. And the king got in, and the excellent car, at the command of Raghira, rose up into the higher atmosphere. And in that car, coursing at will, Rama greatly delighted.” (Ramayana)

“When the Daityas were being slaughtered they again took to their vimana and, employing the Danava science, flew up into the sky . . . I (Arjuna) assaulted their vimana . . . Wounded by the flight of deadly-accurate iron missiles, the Asura vimana fell broken to the earth . . . Matali swiftly descended earthward, as in a steep dive, on our divinely effulgent car.” (Mahabharata)

“Karna took up that fierce weapon, which resembled the tongue of the Destroyer or the Sister of Death. That terrible and effulgent dart, Naikartana, was hurled at the Rakshasa. Beholding that excellent and blazing weapon . . . the Rakshasa began to fly away in fear . . . Destroying that blazing illusion of Ghatotkacha and piercing right through his breast that resplendent dart soared aloft in the night . . . Ghatotkacha, then uttering diverse roars, fell, deprived of life by the dart of Sakra.” (Mahabharata)

“The vimana had all necessary equipment. It could not be conquered by the gods or demons. And it radiated light and reverberated with a deep rumbling sound. Its beauty captivated the minds of all who beheld it. Visvakarma, the lord of its design and construction, had created it by the power of his austerities, and its outline, like that of the sun, could not be easily delineated. (Mahabharata)

“And he also gave [unto Arjuna] a car furnished with celestial weapons whose banner bore a large ape . . . And its splendour, like that of the Sun, was so great that no one could gaze at it. It was the very car riding upon which the lord Soma had vanquished the Danavas. Resplendent with beauty, it looked like an evening cloud reflecting the effulgence of the setting Sun.” (Mahabharata)

“Bhima flew along in his car, resplendent as the sun and loud as thunder . . . The flying chariot shone like a flame in the night sky of summer . . . it swept by like a comet . . . It was if two suns were shining. Then the chariot rose up and all the heavens brightened.” (Mahabharata)

“And on this sunlike, divine, wonderful chariot the wise disciple of Kuru flew joyously upward. When becoming invisible to the mortals who walk the earth, he saw wondrous airborne chariots by the thousands.” (Mahabharata) 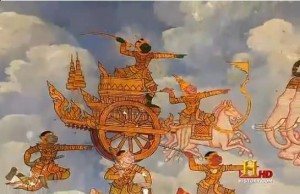 “And the celebrated Arjuna, having passed through successive regions of the heavens, at last beheld the city of Indra. And there he beheld celestial cars by thousands stationed in their respective places [an airport?] and capable of going everywhere at will, and he saw tens of thousands of such cars moving in every direction.” (Mahabharata)

“And having vanquished his foe, Krishna furnished with weapons and unwounded and accompanied by the kings, came out of Girivraja riding on that celestial car . . . upon that car Krishna now came out of the hill-fort. Possessed of the splendour of heated gold, and decked with rows of jingling bells . . . always slaughtering the foe against whom it was driven, it was the very car riding upon which Indra had slain ninety-nine Asuras of old.” (Mahabharata)

“And thereupon that best of cars became still more dazzling with its splendour and was incapable of being looked at by created beings, as the midday sun surrounded by a thousand rays . . . And Achyuta, that tiger among men, riding with the two sons of Pandu upon that celestial car . . . coming out of Girivraja, stopped (for some time) on a level plain outside of town.” (Mahabharata)

“We beheld in the sky what appeared to us to be a mass of scarlet cloud resembling the fierce flames of a blazing fire. From that mass many blazing missiles flashed, and tremendous roars, like the noise of a thousand drums beaten at once. And from it fell many weapons winged with gold and thousands of thunderbolts, with loud explosions, and many hundreds of fiery wheels. Loud became the uproar of falling horses, slain by these missiles, and of mighty elephants struck by the explosions . . . Those terrible Rakshasas had the shape of large mounds stationed in the sky.” (Mahabharata)

“Vimanas, decked and equipped according to rule, looked like heavenly structures in the sky . . . borne away they looked like highly beautiful flights of birds. (Mahabharata)

“Gifted with great energy the Rakshasa once more came down to Earth in his golden vimana . . . when it had landed it looked like a beautifully shaped mound of antimony on the surface of the ground.” (Ghatotrachabadma)

“The splendid chariot, made of silver and coated with tiger-skin, and bright like the fire itself, making a noise like the roaring of the clouds; defying all obstacles, adorned with jewels and gold, dazzling to the eyesight and bright . . . went speedily on, making space resound like unto the muttering cloud in the sky. He issued out of his abode like the beautiful moon passing through a huge cloud.” (Ayodhya Kandam, XVI, pp. 235-236)

“Causing the heaven and the earth to be filled by a loud sound, then Indra came to Yudhishthira on a car and asked him to ascend it.

“Seeing his brothers fallen on the earth, King Yudhishthira the just said to that deity of a thousand eyes these words: ‘My brothers have all dropped down here! They must go with me. Without them by me, I do not wish to go to the celestial region, O lord of all the celestials. The delicate princess Draupadi, deserving of every comfort, should go with us! You should permit this.’

“Indra answered, ‘You shall behold your brothers in the celestial region. They have reached it before you. Indeed, you shall see all of them there, with Krishna. Do not give way to grief, O chief of the Bharatas! Having renounced their human bodies they have gone there, O chief of the Bharata race! As for you, it is ordained that you shall go there in this very body of yours.'”

[After a long debate between the two the following occurs.]

“Then Dharma and Indra and the other deities, causing Yudhishthira to ascend on a car, went to the celestial region. Those beings crowned with success and capable of going everywhere at will, rode their respective cars. King Yudhishthira, riding on his car, ascended quickly, causing the entire sky to blaze with his effulgence.”

“Steeds and Wheels”
(This authors interpretation)

In both the Mahabharata and the Ramayana the researcher encounters the rather puzzling use of “steeds” and “wheels” (necessary componants of the conventional ground-bound war chariot). But why use such terminology when describing aerial vehicles? At first, this was a little baffling—after all, flying asses yoked to an airship?

These seemingly incongruous elements may be nothing more than the result of strong Hindu tendencies to allegorize, as well as translators who were sadly lacking in technological savvy and vocabulary. First let’s consider the application of the term “wheels” to the aircraft known as vimanas. In the Mahabharata one discovers this enigmatic passage:

“Indra’s vimana endued with great effulgence and driven by Matali, came dividing the clouds and illuminating the firmament, filling the entire sky with its roar . . . also propellers furnished with wheels, working with atmospheric expansion, producing sounds loud as the roar of great masses of clouds. . . Indra’s vimana was whisked along with such speed that the eye could scarcely follow.” (Vana Parva, Sec. xlii)

Let me draw attention to the phrase “propellers furnished with wheels, working with atmospheric expansion.” This is the way a modern jet engine works: pulling in fresh air using impeller blades, expanding the air by heating it, then directing it through more blades, which turn a shaft connected to the forward turbines, which packs in more air. If we substitute “impellers” for propellers and “turbines” for wheels—both more modern terms—it begins to make a great deal of sense.

Ancient drawings of these machines actually portray turbines and expansion chambers similar in some ways to our modern jet engines. So, at this point let me suggest that in many cases the Sanskrit word chakra should be translated “turbine” rather than “wheel,” without doing violence to the Sanskrit.

The ancient Aryans of India tended to allegorize a lot, making it difficult to look at their propulsion systems from our scientific point of view. Often the vimanas were said to be drawn through the sky by “celestial steeds” (whether horses, swans, asses, or elephants). What means this?

No doubt some of these descriptions are not allegories, but are presented in such a manner because the propulsion units were deliberately constructed to resemble these animals! The following passage illustrates this clearly describes:

“A huge and terrible black vimana made of black iron, it was 400 yojanas high and as many wide, equipped with engines set in their proper places. No steeds nor elephants propelled it. Instead it was driven by machines that looked like elephants.” (Ghatotrachabadma)

In many other cases they may be using such terms as a blind, deliberately covering up the true nature of the form of propulsion utilized. The word “celestial” may be included merely to cue the informed reader that the following term is not to be taken in its mundane, or “earthly,” sense. One particular text states emphatically: “Manufacturing details of these machines are withheld for the sake of secrecy, not out of ignorance.” (Samarangana Sutradhara)

*This is always the case in P. C. Roy’s translation of the Mahabharata (i.e., if a passage contains the word “vimana,” it is from one of the alternate sources listed in the bibliography below). All excerpts from the Ramayana are from Manatha Nath Dutt’s translation (who uses the term “vimana”). The Puranas are from Dr. Richard L. Thompson’s work “Alien Identities”.

One thought on “VIMANAS in sanskrit literature”